As a boy growing up in Indiana, Don Gummer liked assembling model airplanes, Erector-set constructions, tree houses and forts. He lived in a neighborhood where a great many houses were being built. He admired their frames and enjoyed playing in the construction sites. In 1960, at age 13, he drew a small picture of a house, which incorporated a ladder, stairs with a banister, and open windows, set against curving trees in the background. He could not have known it then, but he already was disposed toward construction in space and had fastened on the kinds of shapes that would be prevalent in his mature sculpture. Gummer began to build abstract sculptures in a Constructivist vein in 1968. In a seminal work, Separation (1969), he started with a stone that attracted him because it looked like Brancusi's Fish.

In 1970, upon obtaining a BFA from the Boston Museum School, Gummer went on to graduate studies at the Yale School of Art. Developing the organic/geometric theme of Separation, he began to create earthworks in his studio, the "formless" earth and stones in each piece spread on the floor and overlaid with a geometric wire grid, as in Lake (1971).

After his graduation with an MFA from Yale in 1973, Gummer moved to New York City. The following year, he was selected by Richard Serra to mount a solo show at Artists Space. There he built his most ambitious installation to date. Titled Hidden Clues, it was a massive, room-size structure, composed of Sheetrock, wood and paper. From a distance it looked Minimalist, but as one experienced it from different viewpoints it became increasingly complex. The incremental process of exploration called for a lengthy dialogue with the work, during which viewers' awareness of both space and time was intensified. Most of Gummer's subsequent works would also be complex, and would have to be experienced in time.

He continued to create large-scale installations in his studio. A few had table like structures whose tops were open geometric configurations composed of wood slats. In 1974, with these two-dimensional "tabletops" in mind, Gummer eliminated the bulky walls in his installations and began to compose new frameworks made up of linear and planar elements. Contributing to this change was his job as a union carpenter at the Olympic Tower on Manhattan's Fifth Avenue, where he was employed from 1973 to 1975.

From the mid-1980s to the present, the dominant components in his sculptures have been planes composed of parallel horizontal and vertical slats or bars. The repeated linear elements form "systemic" geometric compositions, like those of Max Bill or Richard Lohse. Unlike the work of these Constructivists, however, Gummer's forms evoke motion, like the lines of three in Futurist paintings. The sense of movement is enhanced when the slatted forms resemble ladders, suggesting climbing and descending, doubling back, or twisting and turning vertically and diagonally. When varied in size and shape and situated in different parts of a work, the ladderlike elements are choreographed, as it were, giving rise to rhythms that course through the entire piece. Spiraling and spinning upward and outward, his works not only create a sense of motion but look top-heavy, off balance, as if about to tumble. At the same time, the top-heavy elements often seem to rest gracefully on a tiny base, balanced like a ballet dancer on pointe. The works, while clear, are also ambiguous; a number look ramshackle, jerry-built, jumbled, even chaotic. Visually following Gummer's ladderlike forms and other open configurations, and seeing through them to still other forms and complexes of forms, requires prolonged viewing. 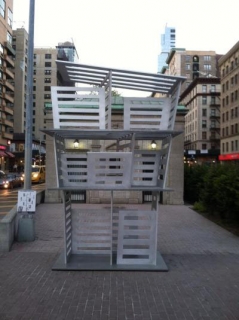